Open-PVP
In Open-PVP worlds you can attack any player (with exception on Rookgaard).
This will give you a white skull

, and if you kill someone you will get a protection-zone lock for 15 minutes and your skull will stay during that time.
If you kill a player without a skull, you will gain a frag, and depending on amount of frags, you may recieve a red skull

or even get banished.
You do not gain frags from killing players wearing skulls.
If you would recieve a redskull, it will be lasting for 12 days from the last moment you had frags enough for a redskull.
A redskull always drop all items upon death, so if you have a redskull, be extra careful.

Yellow Skull System
If a player attack a skulled players that didn't first attack them, they will gain a yellow skull

Death Reduction System
If you die unfairly in a PVP situation your death-losses might be reduced depending on the situation.
The more players and higher levels they are that kill you, the more your losses will be reduced.
If you die while not having a skull and haven't killed another player in the last 24 hours, you are extra protected against team-ambushes.
And if you haven't made a single frag for more than a week, you have additional protection against death-losses.
You are not protected by the reduction system if you have a white/red skull, nor when you have unprovokedly attacked another player.

The reduction system is a design to protect dedicated players from being targets of less dedicated players who just seek to kill players for fun on dangerous levels.
Game killing such as trying to make players unable to play the game until nobody is left online.

PVP-Enchanted
A PVP-Enchanted world work much the same as an Open-PVP world with some small difference.
If the player you kill is at least 90% of your own level, you gain a part of the experience that player loses in the death.
In addition to that, the amount of frags for redskull/banishment is twice as high as on an Open-PVP world. 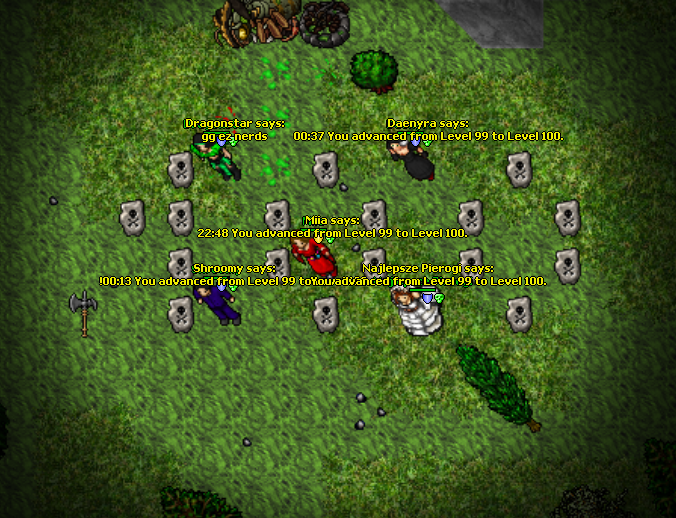